Hello friends and fellow book lovers! If you looked at my TBR, you’ll know that this book was not on it. During the first few days of March, I didn’t end up reading anything on TBR and just went rogue lol. Either way, one of the books that came off hold was The Worst Best Man by Mia Sosa and I was super excited to read it so I knew I had to review it so let’s get into it.

This is my spoiler-free review of The Worst Best Man. 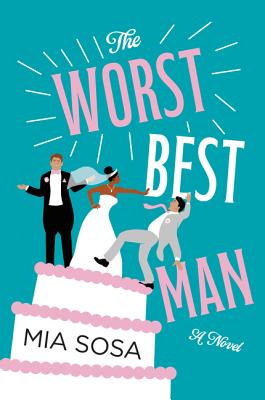 A wedding planner left at the altar. Yeah, the irony isn’t lost on Carolina Santos, either. But despite that embarrassing blip from her past, Lina’s managed to make other people’s dreams come true as a top-tier wedding coordinator in DC. After impressing an influential guest, she’s offered an opportunity that could change her life. There’s just one hitch… she has to collaborate with the best (make that worst) man from her own failed nuptials.

Tired of living in his older brother’s shadow, marketing expert Max Hartley is determined to make his mark with a coveted hotel client looking to expand its brand. Then he learns he’ll be working with his brother’s whip-smart, stunning—absolutely off-limits—ex-fiancée. And she loathes him.

If they can survive the next few weeks and nail their presentation without killing each other, they’ll both come out ahead. Except Max has been public enemy number one ever since he encouraged his brother to jilt the bride, and Lina’s ready to dish out a little payback of her own.

But even the best-laid plans can go awry, and soon Lina and Max discover animosity may not be the only emotion creating sparks between them. Still, this star-crossed couple can never be more than temporary playmates because Lina isn’t interested in falling in love and Max refuses to play runner-up to his brother ever again.

Normally, I would have more to talk about but I really want to get into my review as I finished this book last night and everything is fresh in my mind so let’s get into it.

What I enjoyed about The Worst Best Man

What I didn’t enjoy about The Worst Best Man

While I did have some issues, I really did enjoy this book. I’m happy that my library bought it since I suggested it lol. I am intrigued to see what she does with the second book in this series. Personally, I think it would better as a standalone but I’ll still check out Dean’s book. Overall, this was a solid romance book despite having a handful of problems that will hopefully be ironed out in the next one.

Have you read The Worst Best Man? Would you recommend Mia Sosa if you’ve read any of her other books? I’d love to know! ❤

8 thoughts on “The Worst Best Man: A Spoiler-Free Review”