Hello friends and fellow book lovers! Hopefully, you all had a lovely October and are ready for a great November. Anyways, I’m going to keep this intro pretty short but this month, I participated in The Nightmare Before Book Princess Reviews Readathon. I’m going to include all the books I read for that and any of the additional books in the end. 🙂

Escaping from Houdini by Kerri Maniscalco: Finished October 4th. I wrote a review of this one so you can check it out! I used it for the following prompt, Doctor Finklestein: A Spooky Book with an Eccentric Character so book 1 of the read-a-thon officially done!

Sheets by Breanna Thummler: Finished October 5th. This is a graphic novel, following the friendship and hardships of a girl and a ghost. This book is incredibly sad as it deals with death, grief, and poverty among many other issues. At its core, Sheets is about an unlikely friendship. It also has one of the cutest art styles I’ve ever seen. I used it for the following prompt, Zero: A Book with Ghosts and my second read is done! 4/5 stars.

The Way I Used To Be by Amber Smith: Finished October 6th. This is a book chronicling a girl named Eden who is raped by her brother’s best friend and the impact it has on her life. It follows her freshman, sophomore, junior and senior year in high school and this book broke me. It was incredibly heavy but still an important read and while it made me uncomfortable, I liked this book a lot. I used it for the following prompt, Jack’s Lament: A book with sad overtones and my 3rd read is done! 5/5 stars.

Dirty Rowdy Thing (Wild Seasons #2) by Christina Lauren: Finished October 9th. I read some intense book so far this month so Dirty Rowdy Thing was exactly what I needed. These books are so addicting, I always end up binge-reading them, lol. Anyways, this book followed the best friend of our MC and the original MC’s love interest’s best friend.

It wasn’t as good as the 1st book as their relationship wasn’t nearly as well-developed and the lack of communication trope. There was also an icky moment when the couple had unprotected sex and it was kind of glossed over but it was fun so I can’t really ask for more. 4/5 stars.

Snotgirl Vol 2: California Screaming by Bryan Lee O’Malley and Leslie Hung: Finished October 11th. This was the second volume in the Snotgirl graphic novel series and it really picked up. It definitely had a mystery element but kept the same art style and left me with even more questions. It made me way more interested in the series and want to know what happens. I used it for the following prompt, What’s This: A Book With A Mystery and my 4th read for the read-a-thon is done! 4/5 stars.

Sadie by Courtney Summers: Finished October 11th. I decided to give hibooks another try and boy, am I glad I did. I can’t imagine trying to read Sadie in any other form than audio. This book followed two different narratives: a podcast called The Girls and the host’s search for Sadie while we’re following Sadie. This book was raw, uncomfortable and at times, made me feel sick.

However, I thoroughly enjoyed it and the only thing I didn’t enjoy was the ending. I used it for the following prompt, Oogie Boogie: A Spooky Book You’re Taking a Gamble On and my 5th read is done. 5/5 stars.

Sweet Filthy Morning After (Wild Seasons #1.5) by Christina Lauren: Finished October 11th. Alright so I read 3 books in one day but two were audiobooks and one was a graphic novel. Anyways, this is a retold version of Sweet Filthy Boy from Ansel’s perspective on audio. It was only 30 minutes so I’m not rating it but it was fun and that’s exactly what I wanted/needed after reading Sadie. 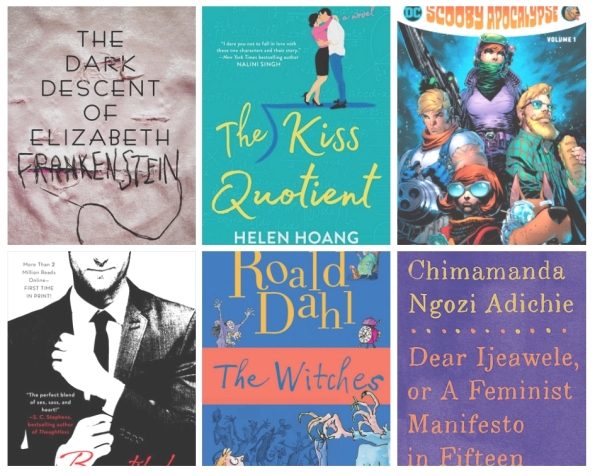 The Dark Descent of Elizabeth Frankenstein by Kiersten White: Finished October 15th. It took me a few days to get through this book, but it was so worth it. It’s a Frankenstein retelling and it follows Elizabeth as she gets taken in by the Frankenstein family, her relationship with Victor and the repercussions of that. At its heart, this book is a story about survival for Elizabeth and how she’s able to survive amidst all the adversity she faces.

This book is dark, atmospheric and just plain creepy at times plus it would go one way and then change course completely. It might have a slow read to start but I ended up enjoying it. I used it for the following prompt, This Is Halloween: Spookiest Book on your TBR and my last TBR read for the read-a-thon is done! 4/5 stars.

The Kiss Quotient by Helen Hoang: Finished October 16th. This is a buddy read I did with Javiera and it was such a fun romance. It’s described as a reverse Pretty Woman and our MC Stella is on the autism spectrum. It’s also full of steamy scenes, adorable moments and just made me smile.

I liked most of the book even though almost 3/4 of the way through, it got a little boring but it picked up soon after. Regardless, it was everything I wanted and more. 4.5/5 stars.

Beautiful Bastard by Christina Lauren: Finished October 17th. I listened to this one on audio and it was just alright. It was full of sexy times and an inappropriate relationship between a boss and his employee. I enjoyed the characters and the sexy times, but not much else. In all honesty, it wasn’t much else and I’m glad because that’s what I listened to it for, lol. 3/5 stars.

Scooby Apocalypse Vol 1 by Keith Giffen: Finished October 17th. I originally read the 1st issue of this and never picked it up again until now. I saw hoopla had it and decided to try again. I’m a huge fan of Scooby-Doo and I liked this! It was dark, gritty and took our favorite characters, changed them completely but there are still some throwbacks to the past.

I liked it but didn’t love it if that makes sense and I read it for the following prompt, Lock, Shock, and Barrel: A Spooky Book with a Gang/Crew and my 7th read for the read-a-thon is done! 4/5 stars.

Witches by Roald Dahl: Finished October 19th. This is my first Roald Dahl book and I’m 25, that’s wild for me to think about. I listened to the audiobook of this and absolutely loved the narration. I liked the plot and the characters, but it didn’t really grab me. I thought it was a decent read but nothing something I’d read again. I read it for the following prompt, The Citizens: A Book with Any of the Following – deformed monsters, ghosts, ghouls, goblins, zombies, demons, mummies, vampires, werewolves, and witches and my 8th read-a-thon book is done! 3/5 stars.

Dear Ijeawele, or a Feminist Manifesto in Fifteen Suggestions by Chimamanda Ngozi Adichie: Finished October 23rd. The audiobook for this was only an hour so I decided why not? As much as I liked it, it was pretty surface-level stuff so it didn’t blow me away but it wasn’t completely pointless either. I’d recommend it if you liked Adichie’s other work, We Should All Be Feminists. I read it for the following prompt, Santa Claus: A Non-Spooky Book for a Palette Cleanser and my 9th read-a-thon read is done! 4/5 stars.

Small Spaces by Katherine Arden: Finished October 25th. This was an audiobook and a rare middle-grade read for me. Maybe middle grade isn’t for me since I didn’t love this as much as everyone else. Similar to The Witches, I enjoyed the narration and the plot but nothing really grabbed me. I found myself getting bored at certain points but I did enjoy the ending. Overall, it was just alright. I read it for the following prompt, Sally: A Spooky Book with a Voice of Reason Character and my 10th read is done. 3/5 stars.

Modern HERstory: Stories of Women and Nonbinary People Rewriting History by Blair Imani: Finished October 28th. I went on the train to visit friends and listened to this on the way there and back. I enjoyed this book, but it was another in a line of other feminists books that have been published recently. I enjoyed learning about the people featured especially ones that I was unaware of but it didn’t blow me away. It was the perfect read for my train ride, though. 3/5 stars.

In total, I read 15 books in October, 10 of which were for the read-a-thon I took part in. It was a lot of fun and I hope they decide to do it again next year! I don’t know if it’s just me but it felt like October flew by. It’s hard to believe it’s already November and time to host my own read-a-thon. 🙂

What was your favorite book you read in October? Mine was either Sadie or The Kiss Quotient, two completely different yet wonderful books.