Hello friends and fellow book lovers! I’m writing this on July 31st at around 10 till midnight so technically not August, yet. However, I just finished a book so there’s no sense in putting it in my July wrap-up.

Either way, I’m keeping the format of wrapping up books as I finish this. This month is hopefully going to be incredibly fun and productive. That’s all I can really hope for as my month is a bit jam-packed. Without any more blabbing, let’s get into my August reads. 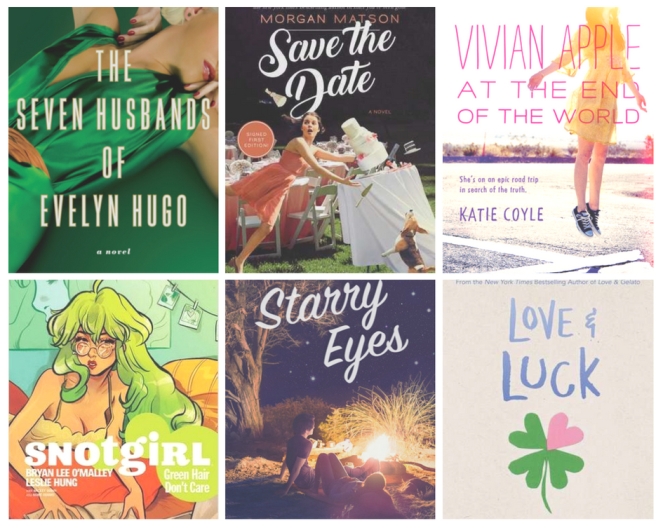 The Seven Husbands of Evelyn Hugo by Taylor Jenkins Reid: Finished July 31st. This book came off hold today and I started it after work, not realizing how captivated I would be. At first, I thought about writing a review of it but a review would never do it justice.

I don’t want to give away anything, but this book was so captivating, emotional and so much more than I imagined. 100% worth the hype and easily one of my favorite reads of the year. 5/5 stars.

Save the Date by Morgan Matson: Finished August 2nd. I wrote a review of this one so check that one for my thoughts. 🙂 4/5 stars.

Vivian Apple at the End of the World by Katie Coyle: Finished August 5th. I mentioned Jane from ItsJaneLindsey recommending this and I’m sad to say, it was disappointing. The premise was unique and the characters were great but everything else fell flat. I think it suffered from being too overhyped by me. 3/5 stars.

Snotgirl Vol 1 by Bryan Lee O’Malley and Leslie Hung: Finished August 6th. This was a unique graphic novel with a cool mystery element, an awesome art style, and was a lot of fun. I didn’t fall in love with it but it didn’t disappoint me, either. 3.5/5 stars.

Starry Eyes by Jenn Bennett: Finished August 7th. I read Jenn Bennett’s other book, Alex Approximately and gave it a 4. Sadly, this one disappointed me as it felt entirely too dramatic for me and some of the characters were terrible people. The last 4 or 5 chapters saved it, though. 2.5/5 stars.

Love & Luck by Jenna Evans Welch: Finished August 8th. I read Jenna Evans Welch’s other book last year and I really enjoyed it. This was a companion novel and it was nearly as good. I loved the setting, plot and the characters but the “plot twist” didn’t really shock me and felt a little bit juvenile for me? 3.5/5 stars.

Anger Is A Gift by Mark Oshiro: Finished August 13th. This is a buddy read I did with Malanie and oh my god! This book was super diverse, confronted racism/sexism/police brutality and much more plus it had incredible friendships and relationships. It was incredibly powerful and honestly, blew me away. If you haven’t read it, please do because it’s such a powerful and important story. 5/5 stars.

The Last Summer of the Garrett Girls by Jessica Spotwood: Finished August 16th. My last read was heavy so I wanted a fun summer contemporary but The Last Summer of the Garrett Girls was much more. It follows the 4 Garrett sisters throughout one summer and it was so good?? It was feminist, featured LGBT+ characters, fandom, loads of pop culture references and easily one of my favorite sibling relationships.

I feel like everyone is sleeping on this but it’s such a unique and fun contemporary. It’s also pretty dark with trigger warnings for outing, homophobia, some slurs, cheating, and drug use. (Sorry if I missed any, I’m going by memory and GR reviews!) 4/5 stars.

Puddin’ by Julie Murphy: Finished August 18th. Once my internet went out, I remembered I had Puddin’ on my Kindle and read that. This was a fun contemporary, following Millie from Dumplin’. It shocked me since it focused on friendship, knowing your worth and living your life however you want it to be. A few plot points, character actions, and Millie’s mom held me back from giving it a higher rating. 3.5/5 stars.

Text Me When You Get Home: The Evolution and Triumph of Modern Female Friendship by Kayleen Schaefer: Finished August 19th. This was another library hold that came off and another non-fiction read. This book focused on female friendship in the modern era but read more like essays than actual research. It was still a fun book and was full of awesome pop culture references. 3.5/5 stars.

One True Loves by Taylor Jenkins Reid: Finished August 20th. This was a book I picked up at a used bookstore and I loved it so much?? Maybe even more than Evelyn Hugo, but something about the story, Reid’s writing style, and the main character just spoke to me. I got emotional many times while reading and I honestly want to reread it over again. I still stand by my statement that Taylor Jenkins Reid writes such authentic relationships and I can’t wait to read the last of her backlist. 5/5 stars.

Bob’s Burgers Vol 3: Pan Fried by various authors: Finished August 23rd. Once again, I’m making my way through the Bob’s Burgers comic series on hoopla. This was enjoyable and had some fun stories, but was easily my least favorite. Since it’s my favorite show though, I can’t justify not giving it less than 4 stars. 4/5 stars.

Emergency Contact by Mary H.K. Choi: Finished August 26th. I’ve heard so much hype about this book and I think that’s what made it so disappointing. Basically, it’s about two people who are each other’s emergency contacts. They each have their individual plotlines but neither were interesting to me nor were the characters. This book was just not for me but it was another library hold that came off! 2/5 stars.

Bob’s Burgers Vol 4: Char-Broiled by various authors: Finished August 29th. I’m all caught up on the 2016 Bob’s Burgers comic series and I really enjoyed it. It wasn’t anything too different from the show but it was still fun. Overall, I enjoyed the series and would recommend it to fans of the show.

Apparently, I read it in the wrong order, though. I should’ve started with 2015 Bob’s Burgers series but it only has 1 volume. I should be able to finish the entire series next month so that’s exciting. 4/5 stars.

I’m calling it a little early, but those are all the books I read in August! Despite it being a somewhat busy month, it was incredibly productive. Overall, I read 14 books in the month of August and met my Goodreads goal of 100 books!!!!!!!!!!

Even though I met my Goodreads goal, I don’t plan on slowing down. There are a lot of books I still want to read and books I’ve been putting off. Maybe since there’s not as much pressure, I’ll look into those. Plus I might try to reread some books I read last year too 🙂

What about you? What were some of your favorite books you read in August?