Hello friends and fellow wizarding lovers! Originally, I planned on writing a review for a different book this week. Instead, I switched things around since I finished the Harry Potter series earlier this month.

At first, I planned on writing a full series review. Personally, I don’t think I remember enough or have enough time to do that. Thankfully, I stumbled upon the Ultimate Harry Potter Tag.

Basically, I’ll get to talk about the book series and my thoughts on it without doing a full review. At the time I’m writing this, I have yet to watch the movies so I’ll probably either skip the movie questions or just answer it about the books. Without too much more rambling, let’s get into it!

1. Which Harry Potter book is your favorite?

This wasn’t a tough question for me, at all. My favorite book in the series has to be Harry Potter and the Order of the Phoenix. Since it was book 5, there was a lot of build-up to this one and we already knew most of the characters.

We also learned more about Sirius and continued to follow Harry in his chase to defeat Voldemort. The only thing I didn’t like about this book was Umbridge but she made a wonderful antagonist to hate when I was reading lol.

2. Which Harry Potter book is your least favorite?

However, I have to give it to The Prisoner of Azkaban, because of Sirius. Sirius is easily one of my favorite characters from the book and I hated how this book portrayed him. I know it was for a reason, but come on man…..

3. Which Harry Potter film is your favorite?

Confession time: I’ve only seen Chamber of Secrets in the Harry Potter film catalog. I’m going with that one for now, but I’m sure it will change since reading the books.

4. Which Harry Potter film is your least favorite?

I’ll pass on this one for now!

5. Which Harry Potter quote is your favorite? 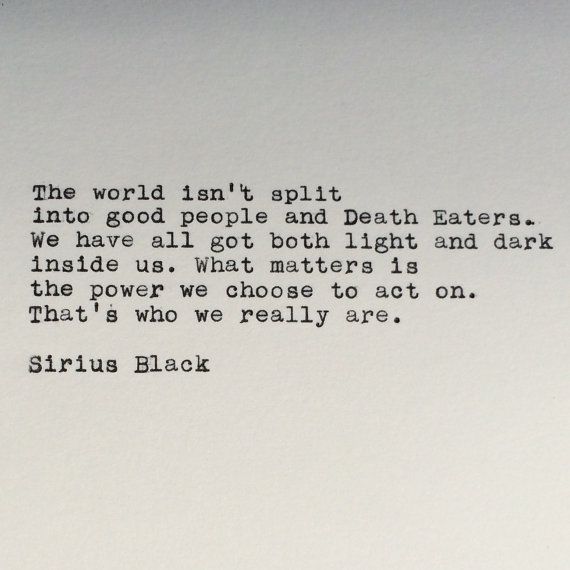 6. Which Weasley is your favorite?

Could my answer be anything but Ron? Well, I do appreciate all the Weasleys, Ron is by far my favorite.

7. Which female character is your favorite?

Hermione, of course! She’s smart, bookish, clever and one of only a few female characters. I wish Harry Potter had more than just Hermione as a lead female character even though I do love her.

8. Which villain is your favorite?

Hands down, Lord Voldemort. The hatred and utter ruthless is what makes me enjoy him so much as a villain. He’s evil through and through without any apologies.

9. Which male character is your favorite?

As if I haven’t already mentioned him a billion times, it’s Sirius Black. He is everything.

This is such a tough question because I enjoyed so many of them! I’m going to go with a tie between Professor McGonagall and Professor Lupin. They’re both such wonderful characters who I always enjoyed seeing.

11. Would you rather wash Snape’s hair or spend a day, listening to Lockhart rant about himself?

Give me Lockhart all day every day. I don’t want to get my hands on Snape’s greasy hair.

12. Duel against an elated Bellatrix or an angry Molly?

Probably Bellatrix. I like Molly too much to try to duel against her.

13. Travel to Hogwarts via Hogwarts Express or Flying Car?

Hogwarts Express, because it’s just so iconic. Plus I’d feel a little safer, riding in a train than with Ron driving.

14.  Kiss Voldemort or give Umbridge a Bubble Bath?

15. Ride a Hippogriff or ride a Firebolt?

Obviously, ride a hippogriff. On one condition: Buckbeak has to be the hippogriff I ride, I won’t accept any other.

As the next section is about the movies, I’m going to skip ahead to the Hogwarts section!

16. Which Hogwarts House was your first gut feeling you’d be a part of?

Honestly Gryffindor. That’s only because it’s the main house they always talk about and I had no clue at first.

17. Which Hogwarts House were you actually sorted into on Pottermore (or any other online-sorting quiz)?

Hufflepuff. After taking multiple quizzes, I can truly say I am a Hufflepuff and proud of it. 🙂

18. Which class would be your favorite?

I’d have to say Charms. I think it’d be the most interesting class and one of the most beneficial too.

19. Which spell do you think would be most useful to learn?

Expecto Patronum because it could help me get out of tough situations and hopefully, I’d have an awesome patronus.

20. Which character at Hogwarts would you instantly become best friends with?

This is a tough one because I feel like I’d get along with a few of them. I’m going to go with Ginny Weasley because I think people underestimate us a lot and then they’re surprised at how clever and tough we are.

21. If you could own one of the three Hallows, which one would it be?

The Invisibility Cloak. I’d love to just sneak around and see what was going on in certain places. It would be fun but also annoying lol.

22. Is there any aspect of the books you’d want to change?

Uh so much??? I feel like since I read this when I was older, I don’t have nostalgia glasses on if that makes sense. I’m just going to talk about two things I’d like to change.

The first thing I’d change is losing Sirius. Um, excuse me, J.K. Rowling??? Why did you do that??? He was such a wonderful character who deserved so much more.

The second thing I’d change is Snape’s treatment of Harry. I know a lot of people say “but he was trying to protect him” which is true. However, he didn’t have to constantly bully and belittle Harry and his parents. I thought that was completely ridiculous and disgusting.

24. If you could bring one character back to life, which would it be?

Am I not the president of the Sirius Black fan club already? It’s obviously Sirius 😛

26. Which parts of the books/films made you cry?

27. What would your Patronus be?

According to the Buzzfeed quiz I took, it’s a horse. Same as Ginny!

28. If you could meet any member of the cast who would it be?

29. Have you played any of the video games?

No. Not a huge video game fan, honestly.

30. If you were on the Quidditch Team, which position would you play?

I’m going to say a chaser. Honestly, I’m not really sure because I’m not the athletic type in magical or non-magical sports.

31. Were you happy with the ending?

For the most part. I enjoyed how neatly the story wrapped up, but I definitely think there’s room for prequels 😛

32. How much does Harry Potter mean to you?

The series does mean a lot to me because I’m very proud I finished it and was able to enjoy it. Since I read it now versus when I was young, I don’t have as much attachment to it. I did enjoy it a whole lot, though 🙂

34. What would you do if you had the Marauder’s Map?

Probably just creep on people to have fun haha.

35. What spell would you make up and what would it do?

My spell would probably have my car drive for me or a spell where I could somehow acquire anything I wanted including money, a job, and a house. Am I bad person??? Oh well, this is just pretending haha.

Almost 40 questions later, I’m finally done. Hopefully, you enjoyed getting a glimpse into my thoughts on Harry Potter, at least the books.

Maybe I’ll follow up later and do a post all about the movies. Quick question: Who are your favorite male and female characters from the Harry Potter series?